Why You Shouldn’t Lie on a Resume 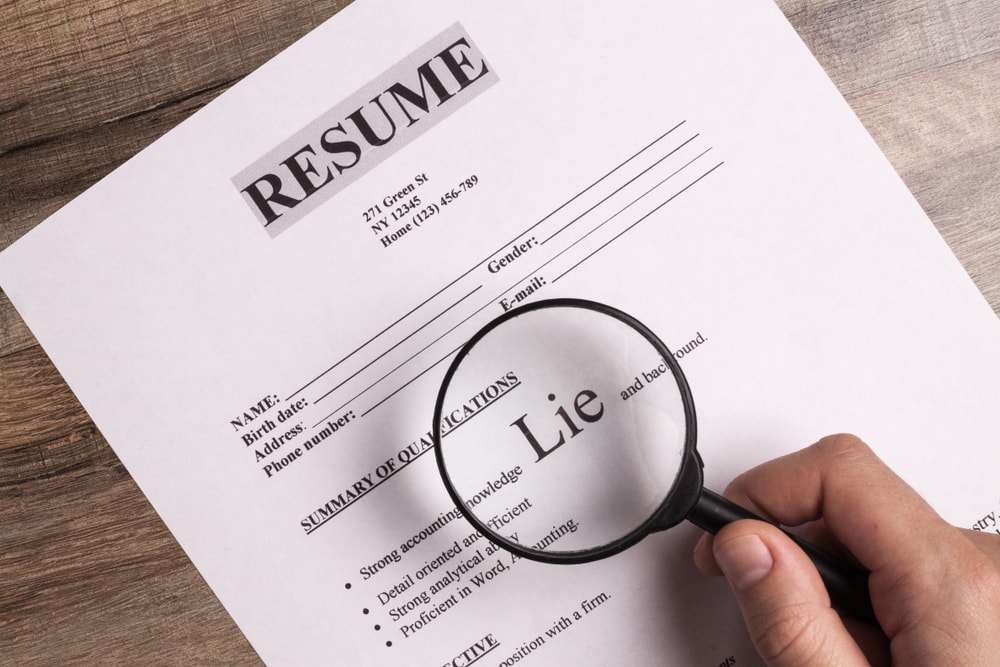 It’s a truth often acknowledged that people shouldn’t lie on a resume. Yet, a large number of people often do.

Whilst it’s not certain exactly how many job candidates lie on their resume every year, it’s fair to say that many exaggerate the truth a little. This seldom reaps results and can be more damaging than practical when trying to get hired.

We’re going to look at a few of the consequences of telling lies when writing your resume now. As you’ll see, these range from major headaches in getting a new job to serious legal consequences.

It Can Hurt Your Chances in the Hiring Process

First and foremost, telling lies on your resume will often lead to failure in getting hired. Making the whole effort pointless.

If you’re caught lying on a resume during the hiring process you will immediately be ejected from contention. Unlike in some situations when you fail to make the grade initially, you will probably not be kept in consideration in the event that another similar position comes up in the future.

Quite simply, getting caught lying will burn your bridges completely with the potential employer. Exaggerating your credentials to get hired doesn’t help anyone in the long term. It’s bad for employers and it’s equally detrimental to you as a professional.

You Could Get a Bad Reputation Amongst Employers

Not only will you have a black mark against your name if a company catches you lying during the hiring process. You could also get a bad reputation when you go for other jobs in your sector.

Different professions have their own communities and within them, word travels fast. It’s quite possible that other hiring managers and influential people in the industry could learn about your mishandling of the truth, which will immediately give you a disadvantage when you go for other jobs in the future.

You Will Probably Get Found Out

In most cases, your lies will probably be uncovered. If you made a claim on your resume about a job that doesn’t exist this can be easily found out with a background check.

Most companies do their due diligence when considering candidates for an opening amongst their ranks. Unsubstantiated claims, jobs that don’t exist and false references can be quite easily picked apart.

Additionally, if you made claims about skills you don’t have or results that didn’t happen and you do get offered the job, your new boss will see quickly that something is up. In this situation, you’ll just end up losing the new job anyway and getting something of a bad reputation.

Is it Illegal to Lie on a Resume?

In most cases, you won’t get into any legal trouble by lying on your resume. However, in a few situations, your mistruths can come back to haunt you in major ways.

This is especially true if you tell lies about any state licensure requirements. Practicing medicine, law, or another profession that’s regulated in this way without the correct credentials will place you and the company in serious jeopardy.

Furthermore, if the lies on your resume have cost the company a significant amount of money either through losses or misrepresentation further down the line, you will find yourself in legal hot water. The company has the right to sue you for not representing yourself properly in this case and for causing harm to their business.

What to Do if You Lied on Your Resume

There are a few things you should do if you have decided to lie on your resume. These might not save you from losing out on the job but they can help limit the damage a little.

1. Withdraw your application
By simply exiting the hiring process you can avoid doing any kind of harm to your reputation.

2. Tell the truth
It may seem difficult to do and will almost certainly stop you from getting the job. However, being open and honest with the hiring manager can calm some of the more negative effects of lies on your resume.

3. Make sure you don’t get caught
This is the least recommended option of the 3. If however, you’re too far down the line this might seem like your only option. Remember though, if you get caught the consequences will be harsh.

In any case, a resume with lies on it is more damaging than helpful. It will need to be updated and replaced with a more accurate and representative document.

ResumeCoach can help you create your new, truthful document in no time at all. With easy-to-use section blocks and optimized templates, you can produce a resume that gets you hired without stretching the truth.

Do you need help writing your Resume?